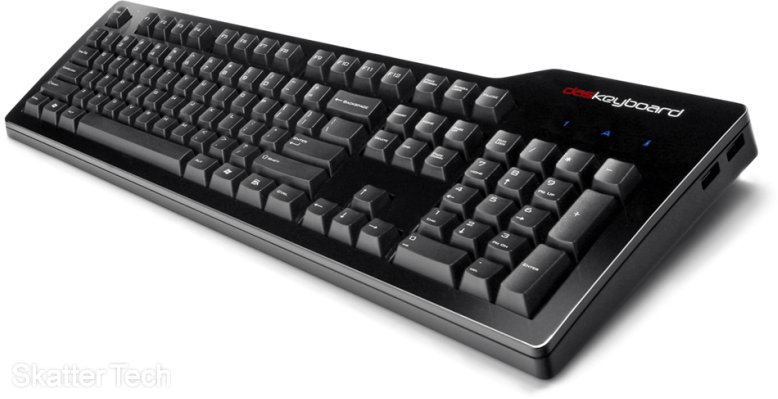 Our SXSW booth was nicely positioned for a few reasons: it was in a high traffic area; the bar was very, very close; we weren't right next to Rackspace or its infernal strength tester; and, finally, we were just a few steps away from the fine people who make Das Keyboard, which means there was ample time for me to stop by, sample the keyboard, and ultimately decide to purchase it (with additional thanks to my employer concrete5, who foot the bill – a decision it may ultimately regret.)

While you may not be familiar with the amusingly-named Das Keyboard specifically, if you have any kind of affinity for touch typing you'll recognize what sets it apart from other keyboards: Das Keyboard is a rugged, good-looking keyboard with mechanical switches. This means serious speed for serious typists, and serious noise for anyone else (more on this later.) This keyboard clicks, both literally and figuratively. I took it for a test drive at SXSW, enjoyed it, and ordered it. It arrived awhile ago, and I've been putting it through its paces since.

This isn't the first keyboard of its kind that I've owned. My favorite keyboard of all time was the Apple Extended keyboard, which used to be the standard keyboard to ship with Macs back in the mid-1990s. That keyboard featured mechanical switches and exceptionally rugged construction: I dropped it multiple times, and my college roommate spilled a 32oz soda on it, and it kept working til the end (although some keys were broken off and lost – and there was stickiness.) I suppose it's a testament to my fondness for that keyboard that I kept using it even in that state. It's to this high standard that I'm going to hold Das Keyboard.

Once the shipping container is opened, I took stock of the box that Das Keyboard comes in. No, this isn't Apple-level artistic packaging, but it's functional and nicely protects and presents your investment.

Along with the keyboard itself, you get a USB cable, simple instructions and a cleaning cloth. This comes in handy, as the keyboard's shiny glossy finish will become marred by dust and fingerprints.

In 2010, setting up a keyboard shouldn't warrant a section in a review, but Das Keyboard makes some strange choices which I find fault with.

What's up with the USB?

The first thing I noticed that was strange about this keyboard is its USB cable. For some reason, Das Keyboard doesn't behave like every single other USB peripheral I've ever used. Instead of having a simple USB cable that extends from the keyboard and is plugged into your USB hub/computer/laptop, Das Keyboard's USB cable is actually two USB cables bound together.

Why? I have no idea - but without plugging in both cables to the host machine or hub, the keyboard's second USB port doesn't work. Ok, ok - what's the big deal? If you get a second powered USB port on the keyboard itself, what does it matter that you have to use two ports on the host machine or hub? I'll show you why it matters. Check out the initial setup of Das Keyboard on my MacBook Pro

My MacBook Pro has two USB ports. Das Keyboard wanted both those ports to be used by the keyboard cable, leaving no ports on the computer free. Thankfully, my USB thumb drive fits well into the keyboard's second USB port, but I'm confused as to why this is even necessary. I had to purchase a USB extension cable in order for Das Keyboard's combined cable fit the MacBook Pro comfortably, and this means extra setup each time I connect and disconnect the machine. Obviously, not a huge deal, but mistifying and worthy of mention.

My MacBook Pro runs OS X 10.4 Tiger. In order to get the keyboard to work with proper key placement (with the Control, Option and Command/Apple Keys in that order) I have to change settings every time I plug in the keyboard:

Then I reverse those when I unplug the laptop and take it home with me.

Finally, as a Mac a user, I feel a slight twinge when I glance down at my keyboard:

Yes, Das Keyboard sells keyboard kits, but I didn't feel like paying more than $20 (when including shipping) to add it to my order, which already cost north of $100.

Setup overall is a mixed bag. It's an area of keyboard usage that I had blithely anticipated wouldn't matter, but it actually accounts for most of my gripes with the product. Granted, they are small – quibbles, really – but a little irritating and confusing for a product that gets so much else right.

The construction of Das Keyboard seems sturdy enough. I haven't done anything foolish like spill a full soda on it, drop it in the ground or turn it over and bash it into a desk, but I have carted it a few places and been somewhat rough while cleaning it, all without incident. The lights on the keyboard are a satisfying blue, and the whole package is a very attractive one.

Here's where we get down to it. This keyboard is fast. Really fast. But it is not quiet. Check out this audio file of me speaking in a normal voice, and then as I continue to speak, I type the same sentence:

This will make enemies in an open office. Sadly, concrete5's office space is probably the absolutely worst work environment for this sort of keyboard, as we all inhabit one large room, but I think everyone puts up with it because I like it (which I very much appreciate.) There has been a noted increase in the use of headphones throughout the office, however.

Yes, Das Keyboard comes with a quiet version, but when I tried it at SXSW I didn't like it. It didn't seem as satisfying. Go loud or go home.

My results are anecdotal in nature, but I think they're still impressive.

Typing Maniac is a Facebook game where the goal is to type words as they appear on screen, before they fall from the top of the screen to the bottom. As the game progresses, the speed increases and the words become more complex.

Prior to Das Keyboard, my highest score was in the 400,000s. Once Das Keyboard arrived, I more than doubled it, in my first try:

Das Keyboard promotes its own typing test, and this was the test used at SXSW when it crowned the fastest touch typist in the world. This test is also available online at any time. Check out my results.

The results don't lie. This is a keyboard for those who type. As a bonus, it looks great and has a nice, satisfying weight. With a premium product comes a premium price. Das Keyboard Professional lists for $129, with a quieter version costing $135. Don't forget to add shipping to that, too. I was fortunate, however, to be able to grab the keyboard for 25% off, with free shipping, thanks to a SXSW-only deal. Scour the web for coupons – you'll likely find some.

Price-wise, this isn't much more than the cost of classic mechanical switch keyboards like the IBM Model M or the Apple Extended. But there's a reason those keyboards went out of fashion: they're expensive! Keyboards have gotten much cheaper since, and for those who are happy with a $19.99 keyboard found at a local superstore, paying more than six times as much is going to be a tall order. If you can afford it, and you're a touch typist, you'll be willing to make the sacrifice.

If you're a great touch typist, you find yourself typing frequently during the day, and you have an enclosed office (or tolerant, headphone-wearing co-workers), buy buy buy.

⇐ CascadiaPHP: So You Want to be an Open Source Hero
concrete5 Add-On Developers: Create Your Own concrete5 Demo (5.4.2.2 and earlier) ⇒
Loading Conversation